Vickey’s Soul Grill, located in McKeesport Pennsylvania, specializes in Southern cuisine including vegan and vegetarian options that "not just feeds the body but nourishes the soul." 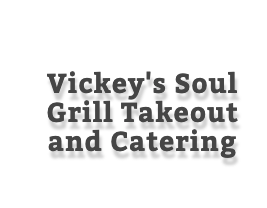 Vickey Giddens is the owner of Vickey’s Soul Grill Takeout and Catering, which specializes in healthier Southern comfort food including vegan and vegetarian options. Before the Equitable Entrepreneurship program, Vickey and her husband were developing their business concept and perfecting dishes within their home, but they were ready to move to the next step. The Idea Foundry team helped Vickey identify and connect with a commercial kitchen, refine her menu, pricing, and business model, and open a line of business credit. During the program, she was able to open for 2 days of takeout through the Penn State Launchbox’s commercial kitchen space in McKeesport and based on business success has since expanded to 3 days per week. Post-program, Vickey has continued to work with Idea Foundry as well as Penn State and the Mayor of McKeesport to secure a permanent location for her business, fulfilling one of her biggest business goals.